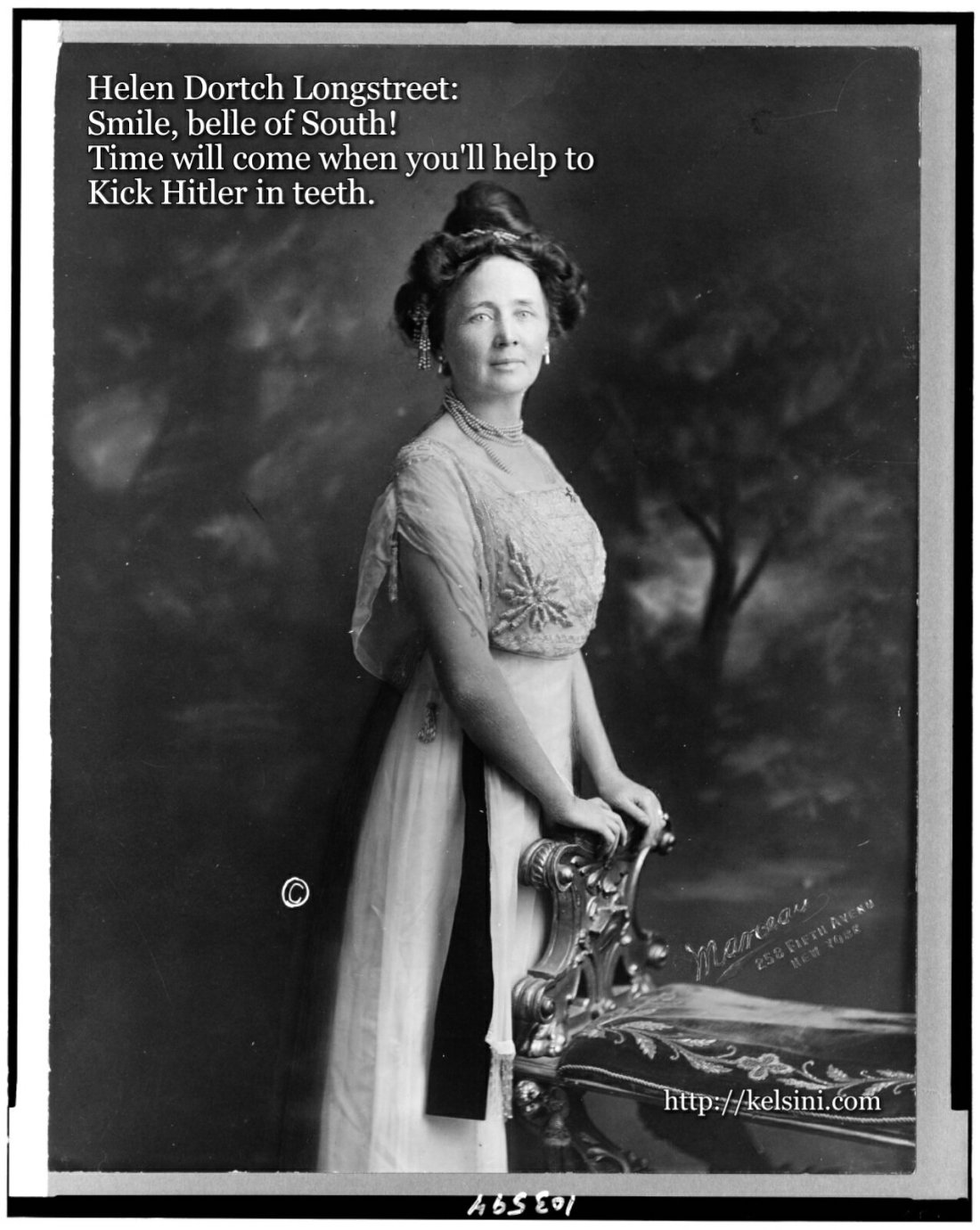 Time will come when you’ll help to

Sometimes, when researching another subject for a haiku, you stumble upon an equally deserving badass. Such was the case with General Longstreet, as that led me to learn about his second wife, Helen Dortch.

Dortch was born in Carnesville, Georgia in 1863, while her future husband was out annoying the Union. Her lawyer father James thought she was a top-notch kid and ensured that she got all the education society permitted her to get. And he put that education to work – while he was editor of the Carnesville Tribune, he gave her employment as a reporter at age 15. Not an easy job for a woman or anyone that age.

Then in 1888, she became owner and editor of the Tribune and pretty much ran the operation by herself. This involved replacing the outdated equipment, editing, typing, managing, and soliciting for subscribers. Dortch succeeded in kicking the circulation up to the thousands, all the while using the newspaper as a platform to support women’s rights.

Then in 1894, she became the first female office holder in Georgia history, as Assistant State Librarian. And she promptly used that position to author a bill that would allow women to climb one ring higher, to the post of State Librarian.

It was in 1897 that she met James Longstreet. He’d been living with a servant and no one else for eight years by that point and was feeling very lonely. (Especially since a lot of his fellow southerners persisted in being total assholes towards him.) So when he met this intelligent, opinionated, lovely friend of his daughter’s, he fell for her right quickly. They married that September. The general’s children apparently weren’t too keen on this match at first, but quickly warmed up to their new stepmom.

(It should be said that he was hardly the only the aged Civil War vet who wound up taking a much, much younger wife. The man gets household assistance and companionship in his twilight years; the woman gets financial security in form of a widow’s pension. Win-win. I’m not saying this was the case with the Longstreets; just that it happened.)

The Longstreets had less than seven years together before James’ death in 1904, but they enjoyed the time they had. Helen helped James manage his business interests and went to bat for him whenever some jerkface talked shit about him in the public sphere. She continued to defend him for the rest of her life, including a (then) failed attempt to get him his own monument at Gettysburg.

After James’ death, Helen did not sit on her ass, collecting that pension. Teddy Roosevelt got her the job of Gainesville’s postmaster, tried to get a statue up to honor Confederate slaves, supported Roosevelt’s failed 1912 bid for the presidency (and was a delegate that appointed him as the candidate for the progressive party), ran as a write-in candidate for the governor of Georgia (vowing to support Black people and fight the KKK), lobbied for conservation, civil rights, and women’s rights issues, and…! (takes a deep breath)

When the USA finally decided to enter World War II, she became a Rosie the Riveter. She was 80. She trained her ass off for the job and stayed at it for two years, acquitting herself well throughout. Why? “This is the most horrible war of them all. It makes General Sherman look like a piker. I want to get it over with. I want to build bombers to bomb Hitler.”

Sadly, she developed dementia in her final years. She died in 1962 in Milledgeville State Hospital.