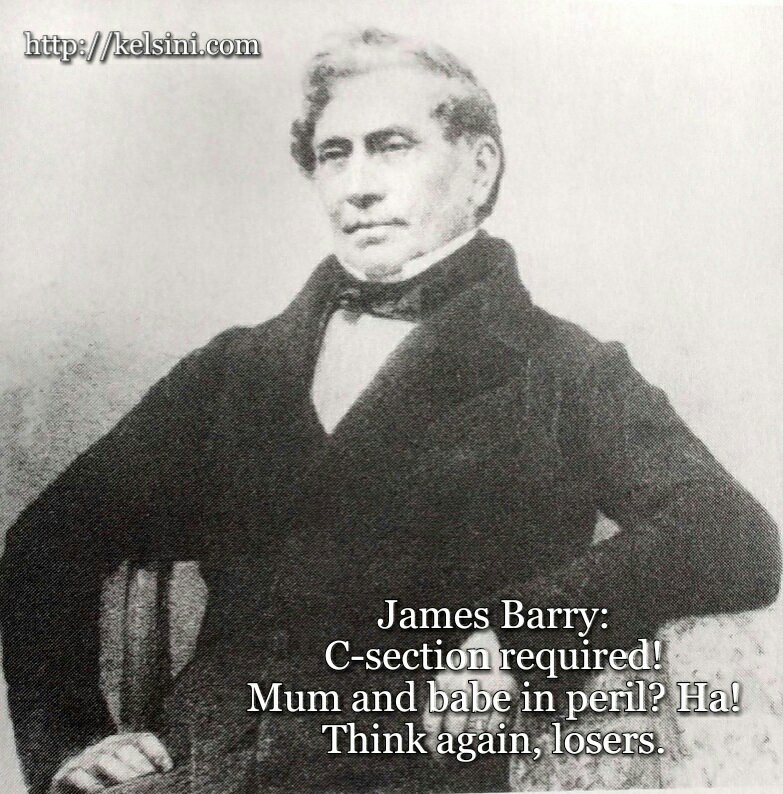 Mum and babe in peril? Ha!

A word on pronouns before we begin: I’m opting for the singular ‘they’ for Barry, as while there is sound speculation that they were transgender, I just don’t feel like there’s enough evidence either way to make a call. (Don’t think I’m one of those who think that transgender folk appeared out of the blue in the 20th century, because that’s stupid. Plus, there’s plenty of folk for whom you CAN make that call.) As such, I’m playing it safe. Also, if you think the singular ‘they’ is grammatically unsound, you can fight me and my bro Shakespeare.

Anyway! James Barry was born in Cork in around 1789. In those days, they were known as Margaret Ann Bulkley. But it wasn’t exactly what you’d call a ‘financially stable’ childhood, as through the twin forces of societal anti-Catholicism and bad money management, their father wound up in debtor’s prison. Big brother John was no help, the future Barry couldn’t get any tutoring gigs either, and incidentally, another mouth to feed arrived in the form of the third child, Juliana. Well, she was passed off as such, but she was probably Barry’s daughter.

In such circumstances, schemes are concocted, and they apparently get pretty wild if your mom’s been talking to your famous dead painter uncle’s liberal-minded friends. Margaret Ann Bulkley was re-named James Barry (after the aforementioned dead uncle) and enrolled at the University of Edinburgh as a medical student in 1809. There, they were nearly kicked out come finals time, as the unbroken voice? Lack of height or stubble? Unmanly features? Clearly, this boy was underage! Regardless, they managed become a fully-fledged surgeon in 1813 and promptly joined the army in that capacity.

And man, did they wind up with a storied career or what? Barry’s first posting was down in Cape Town, where they promptly wowed the socks off the governor, Lord Somerset, by saving one of his daughters from some dread illness. (Rumors had it that it wasn’t just the socks knocked off, although Barry was known to flirt with ladies well enough to annoy their husbands.) Then they performed the first confirmed C-section surgery in which both mother and child survived. Then they cleaned up and improved the place for pretty much everybody – slaves, lepers, the mentally ill, prisoners, you name it. Barry also pissed off a lot of high status peeps while they were at it, but that’s why you make friends with the governor pronto.

Cape Town was followed by Mauritius in 1828, then a spell in England as Barry treated the ailing Somerset until he died. Then Jamaica! Then Saint Helena! West Indies! Malta! Corfu! Let’s just make the whole fucking world more sanitary, why don’t we! Duels were a frequent occurrence, as asshats liked to make fun of Barry’s squeaky voice. And the good surgeon, while apparently possessed of an excellent bedside manner, had one hell of a temper.

But Crimea, to help out with war stuff. DENIED. They visited anyway and managed to royally piss off Florence Nightingale in the process – partly because of Barry’s rather, ahem, strident personality and partly because of a very public dressing-down they received from them. Canada was the last stop on the job, where they proceeded to make the same improvements as everywhere else, but was forced into retirement in 1859.

Barry died of dysentery in London in 1865. Their biological sex and physical signs of long-ago childbirth were discovered by the charwoman who laid them out. The charwoman then spilled the beans to the press when no one fucking paid her for carrying out an essential yet unpleasant job. The reaction? Some, of course, were all like, “I knew it all along!” (The percentage of this group who told the truth about that is uncertain.) Nightingale used this as a chance to reiterate how much she hated Barry. And the British Army just sealed the records for a century and hoped everyone would just forget the whole thing. As if that can stop nosy historians.

In terms of Barry’s personal life, they were teetotal, vegetarian, and fond of dogs. They could be a prick at times, but mostly, a prick for the cause of good.