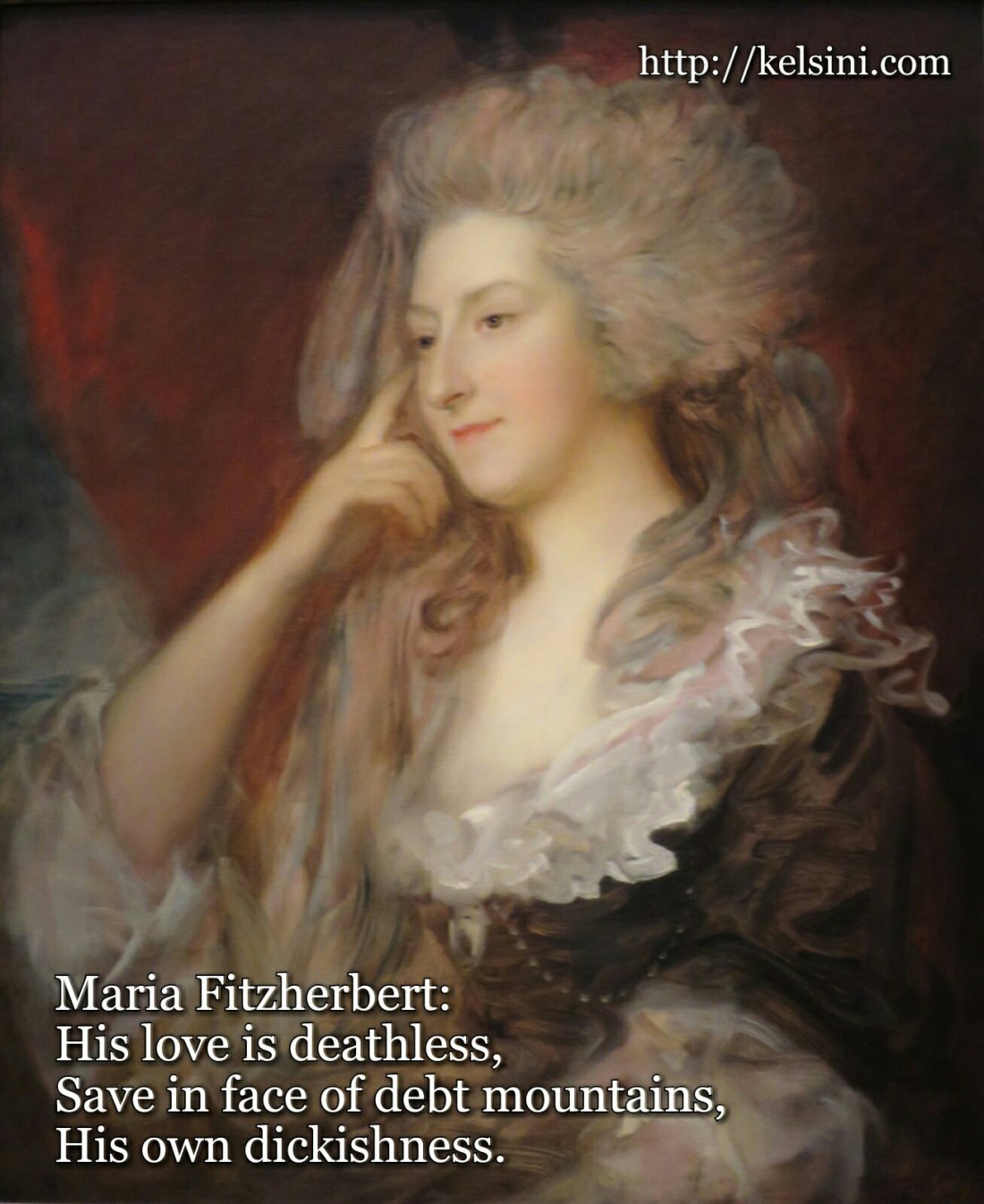 His love is deathless,

Save in face of debt mountains,

Delayed though it is, here is Thursday’s installment of Royal Mistress Week. Friday’s will come this evening, by Taiwan reckoning.

It is a truth universally acknowledged that George IV was the worst – and yes, Jane Austen would have agreed 100% with that statement. His treatment of Maria Fitzherbert (and other ladies) is strong evidence for his terribleness.

Maria Smythe was born at Tong Castle in 1756 and as appears to have been the in thing for young ladies of her class, she was educated in a French convent. In 1775, she married Edward Weld, but only had three months to enjoy wedded bliss before Eddy fell off a horse and died. He hadn’t made a new will yet, so she got nothing. In 1778, she married Thomas Fitzherbert… aaaannnnd he died three years later. Fuck.

To London! Where she soon caught the eye of the young George IV, then Prince of Wales, who badgered her into accepting his love. Then he convinced her to marry HIM. Which would be illegal, as George III made a law declaring his kids had to have his permission if they wanted their marriages to be valid. And even had he given his blessing, G4 would’ve had to give up his place in the succession, as Maria was Catholic. Nevertheless, a secret ceremony was conducted at her house. They may have subsequently had a couple of kids together, but they had to be secret too and raised in other households.

George wasn’t exactly a constant lover and ‘marrying’ Maria didn’t mean he didn’t take other mistresses. Furthermore, he spent money like water and he wound up in debt to the tune of hundreds of thousands of pounds. In 1794, he took up with the scandalous Lady Jersey, who convinced her to properly marry Caroline of Brunswick (who she picked out specifically because she knew she wasn’t George’s type and wouldn’t be a threat to her.). Do that, and Parliament would grant him a fat wad of cash.

He broke up with Maria via letter.

Then after his daughter, the ill-fated Princess Charlotte, was born, he altered his will to leave everything to Maria. He begged Maria to come back to her, and against her better judgement, she did. She eventually wised up and left him for good, and once he was finally king, he told everyone who would listen what a bitch she was and that the whole secret wedding was all her idea. (Fuck if I buy this.)

Nevertheless, in 1830, when she heard George was sick, Maria was kind enough to send him a ‘get well’ letter. Turns out, he was on his death bed and when he received it, he moaned over it and tucked it under his pillow – without bothering to respond, let alone tell her she was dying. He was buried with a miniature of her, how sweet. She would’ve preferred a reply.

Maria passed in 1837, accorded more respect by George’s brother, William IV, than he ever did.