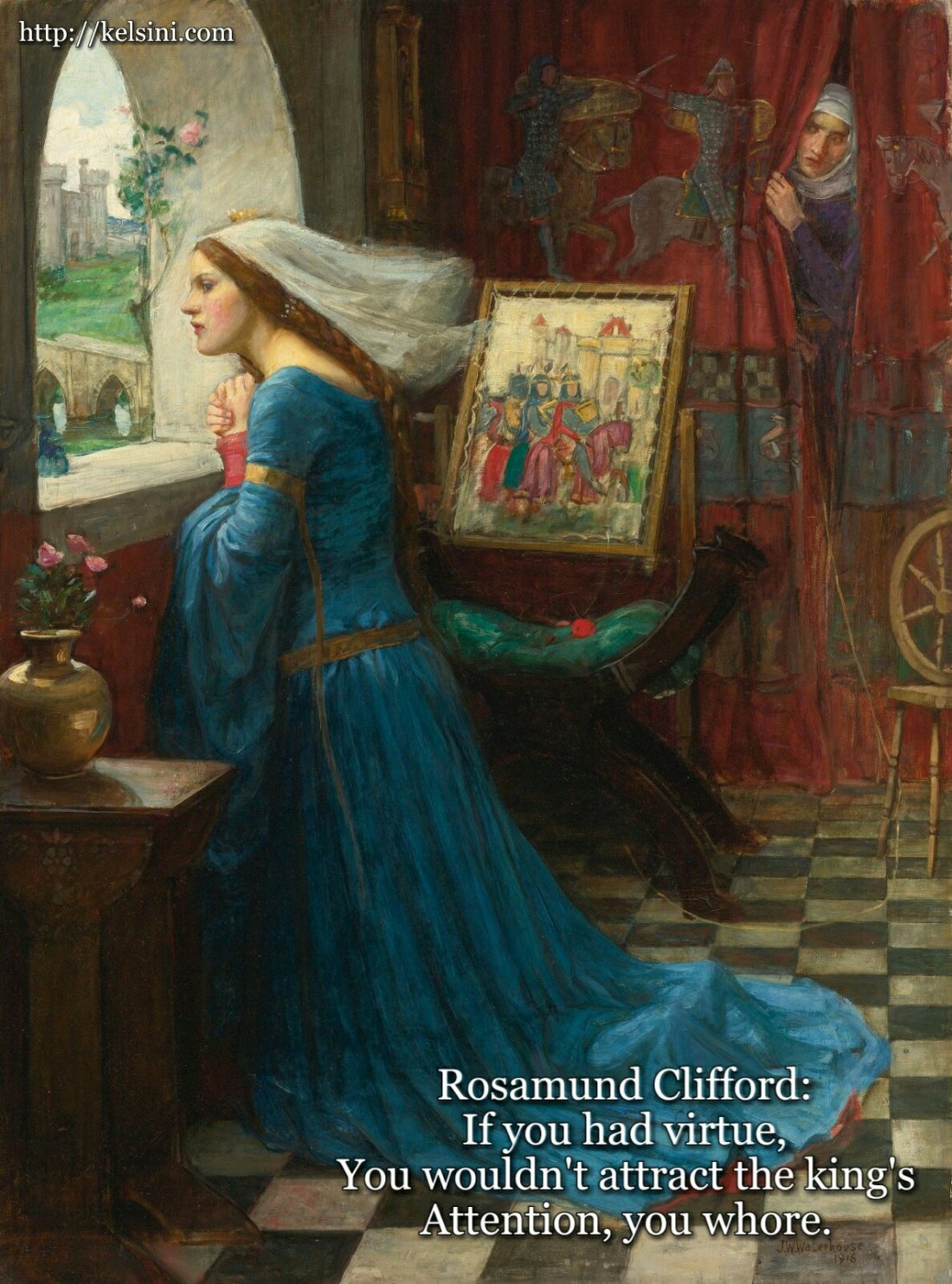 If you had virtue,

You wouldn’t attract the king’s

Rosamund Clifford, mistress of Henry II (father of Richard and John, he of ‘who will rid me of this turbulent priest’ fame), is the subject of today’s installment of Royal Mistress Week. I do not believe she got a fair shake in life, or in the years immediately after her death.

Rosamund was born somewhere between 1140 and 1150, one of the six children of Walter de Clifford. (A marcher lord, which meant his patch of land was on an ambiguous area between England and Wales.) We know she grew up at Clifford Castle and was educated at Godstow Abbey, but we don’t know anything else about her childhood. Theoretically, she had one.

We’re not even sure when Henry’s dalliance with her began. It might have been in 1165, which had the first Christmas Henry and his queen, the BAMF Eleanor of Aquitaine, spent apart. But the evidence points in both directions, so… (shrug) That’s the problem with dealing with patchy medieval sources.

Regardless, it wasn’t until 1174 when Henry’s connection with Rosamund became common knowledge. Henry had an exciting time in the years immediately prior – you know, putting down a rebellion by his pack of ungrateful sons who were egged on by Eleanor, that sort of thing. In response, he locked up his queenie in Old Sarum. At the same time, Henry made a nice palace in Oxfordshire, where Blenheim Palace stands today. (You remember? Where yesterday’s subject gave birth to a certain prime minister.)

Guess what else we don’t know? 1) How much time the two actually spent together (if she didn’t join him on the road, it would have been very seldom), and 2) whether they actually had any children together. (A few bastards have been said to have been produced by Rosamund, but the named ones were demonstrably the children of other women.) Hell, we don’t even know if Rosamund even liked Henry.

There is a story that Eleanor hunted her down and presented her with a dagger and a bowl of poison, of which Rosamund chose the bowl. This is really, really unlikely to be the case, as Eleanor was locked up at the time and had she the means of escaping willy nilly, she’d have used it in a more productive way than offing one of her estranged husband’s many mistresses.

What we know about the actual circumstances of her death is this: sometime, probably in 1175, she got sick, ended things with Henry, and scampered back to Godstow Abbey. There she died the next year. Henry shelled out for a nice tomb for her there, and he and her pops made both financial and land contributions to the abbey.

Then 15 years later, a bishop got a bee in his bonnet over her having such a nice grave, moved it, and made a new inscription: “This tomb doth here enclose the world’s most beauteous Rose, / Rose passing sweet erewhile, now nought but odour vile.” Also, contemporary chroniclers made a bunch of stupid puns about her name.

As if it were her fault Henry II couldn’t keep his dick in his hose. No wait, it was, because she was a sinful daughter of Eve.