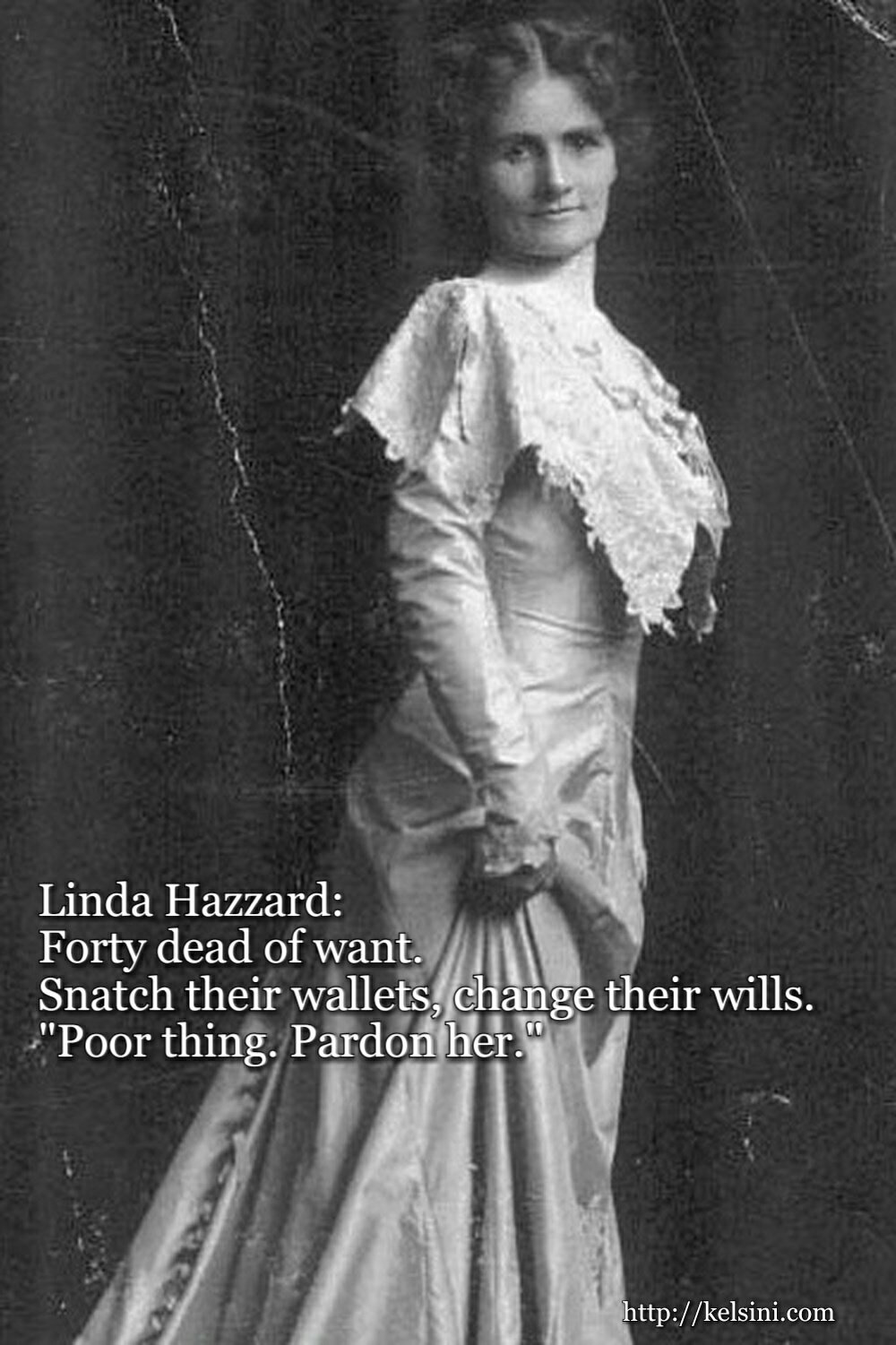 Snatch their wallets, change their wills.

Today on Quack Week, we’ve got Linda Hazzard, who was an actual serial killer! Fun!

Linda Hazzard was born in 1867, a wild time where women were legally allowed to be doctors. Hazzard wanted to be a doctor too, but she didn’t want to do any actual training. No, she just claimed she was practicing ‘natural’ medicine to bypass legalities and opened her sanitarium in Olalla, WA.

Hazzard was a big booster of fasting cures. See, fasting would get rid of the toxins. (… What year are we talking about again?) Patients could enjoy a varied diet of diluted tomato, asparagus, AND orange juice, for weeks, months on hand.

Then in their weakened states, she’d rob them of their belongings, trick them into giving her power of attorney, and forge their correspondence. 40 died, including one shot in the head when trying to escape. She’d conduct the autopsies, of course, and find in every case that the patient died of an undiagnosed disease.

This ended when she was convicted of manslaughter in the death of the British, wealthy, hypochondriac Claire Williamson. She and her sister Dora came to Hazzard’s sanitarium and they soon became entrapped and bedridden. Dora managed to smuggle a letter out to a family friend, who swooped in from Australia to save them… Too late to save Claire, who was 50 lbs when she died.

Hazzard’s defense? Claire had died of cirrhosis, not starvation! Gawd! Why is the medical establishment always picking on her? They’re just jealous of her success!

Two years later, the fucking governor of Washington pardoned her. She took advantage of this opportunity by inflicting herself on New Zealand, until the kiwis cottoned on to the fact that she was not actually legally allowed to practice medicine. Back to Washington! She opened up a new sanitarium and ran it for fifteen goddamned years before fire sorted that shit out.

Near the end of her life, she swallowed her own medicine (sorry) and died of fasting in 1938.