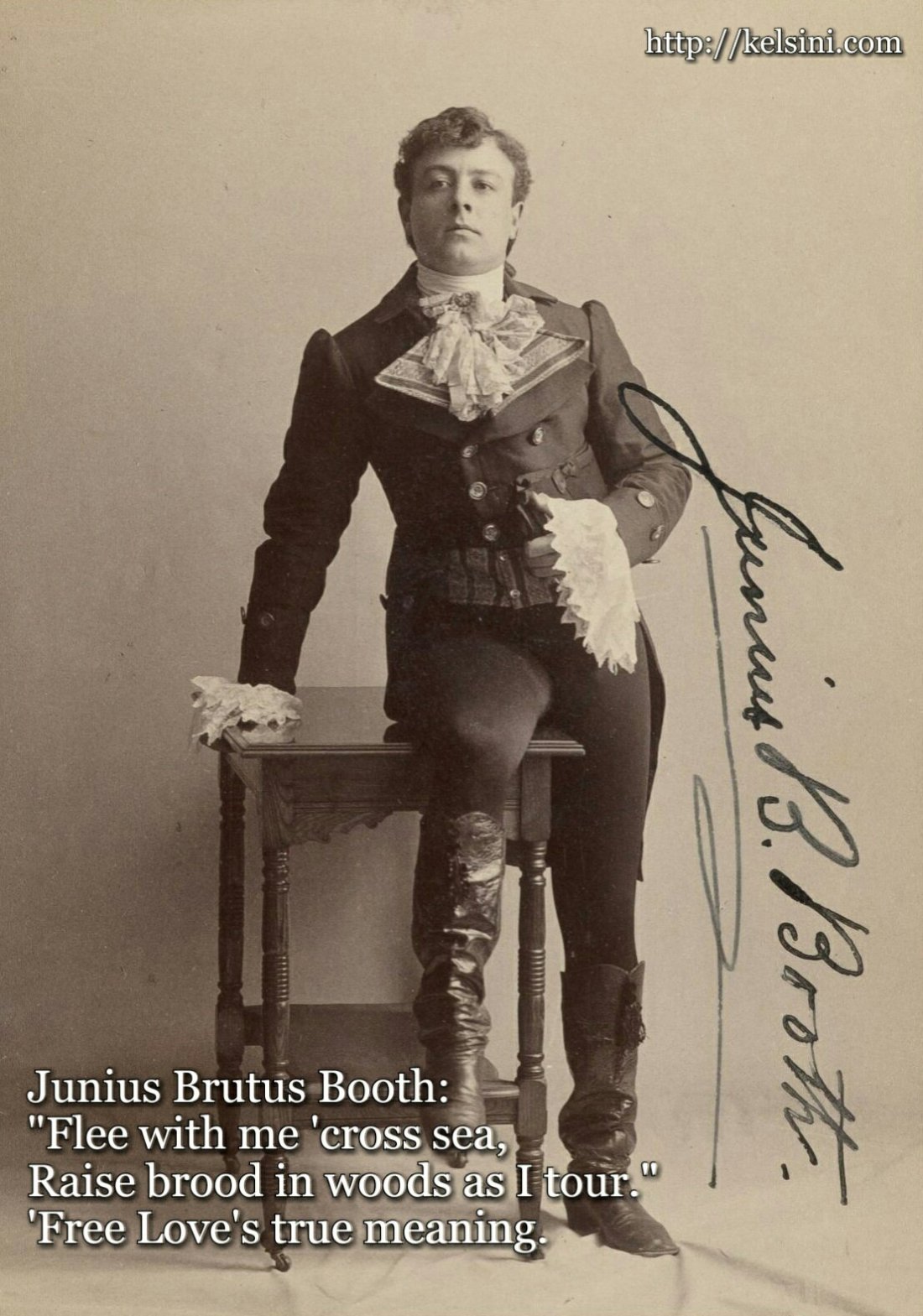 “Flee with me ‘cross sea,

Raise brood in woods as I tour.”

Junius was born in 1796 in London to a lawyer who was a total George Washington fanboy. He started acting at 17 and became a big deal at age 19, becoming rivals with previous big deal, Edmund Kean. (No mobs or dead sheep, though.) He married Marie Delannoy and had one living son with her.

A few years later, he met sheltered flower girl Mary Ann Holmes, seduced her with Byron’s poetry and free love notions, knocked her up, and took her to the US. He stashed her in the Maryland countryside as he toured and she had lots of babies, five of nine surviving. (Three died in quick succession in 1833, with another, Henry, dying from smallpox after his vaccination didn’t take.) He kept Marie in the dark by telling her that he was on an extended tour, occasionally visiting, and sending money regularly.

Alas, while touring, Junius discovered whiskey. This caused his stellar rep to suffer, as he was violent to casts both on and offstage, fucked up his scenes, and had to be locked up so he wouldn’t skip plays to go drinking. Cash flow suffered and Edwin was chosen to go be his dad’s dad.

The cash issue caused another problem to come to a head, as payments to his English family ceased. Marie decided something was fucky and sent her boy Richard to investigate. He found the second family, told mum, and scandal! Marie came to live in Maryland so she could get a divorce and give Mary Ann a very bad time.

In 1852, he struck out to California with Edwin in tow, joining Junius Jr. They hoped to rake it in there, as gold miners fucking love plays, but natural disasters and the ridiculous cost of living made the whole enterprise a disaster. Edwin peaced out and Jr opted to stay in his new home, leaving their Pa to meander home by himself. He died of some unfortunate disease from drinking bad water and Mary Ann never let Edwin off the guilt train.

You know what happened to Edwin and John Wilkes, so here’s a rundown of the others:

Richard Junius Booth – Went into teaching, and who could blame him?

Rosalie Ann Booth – Became the designated spinster whose job it was to mind Mom. Had a reputation as a melancholy invalid, which probably wasn’t so.

Asia Booth Clarke – Married an actor before the war, ditched the US for England and became hardcore Catholic after. Became the family’s biographer and hated immigrants, black people, the English, and the Irish.

Junius Brutus Booth Jr. – Went into theater management. (He still acted, but knew he was over shadowed by Edwin and his own wife, Agnes.) Arrested after Lincoln’s assassination, but released because he had nothing to do with it but a weird brother who got bad ideas.

Fun fact: Junius once wrote a death threat to Andrew Jackson, but ’twas a joke and they were buds, so they laughed it off.