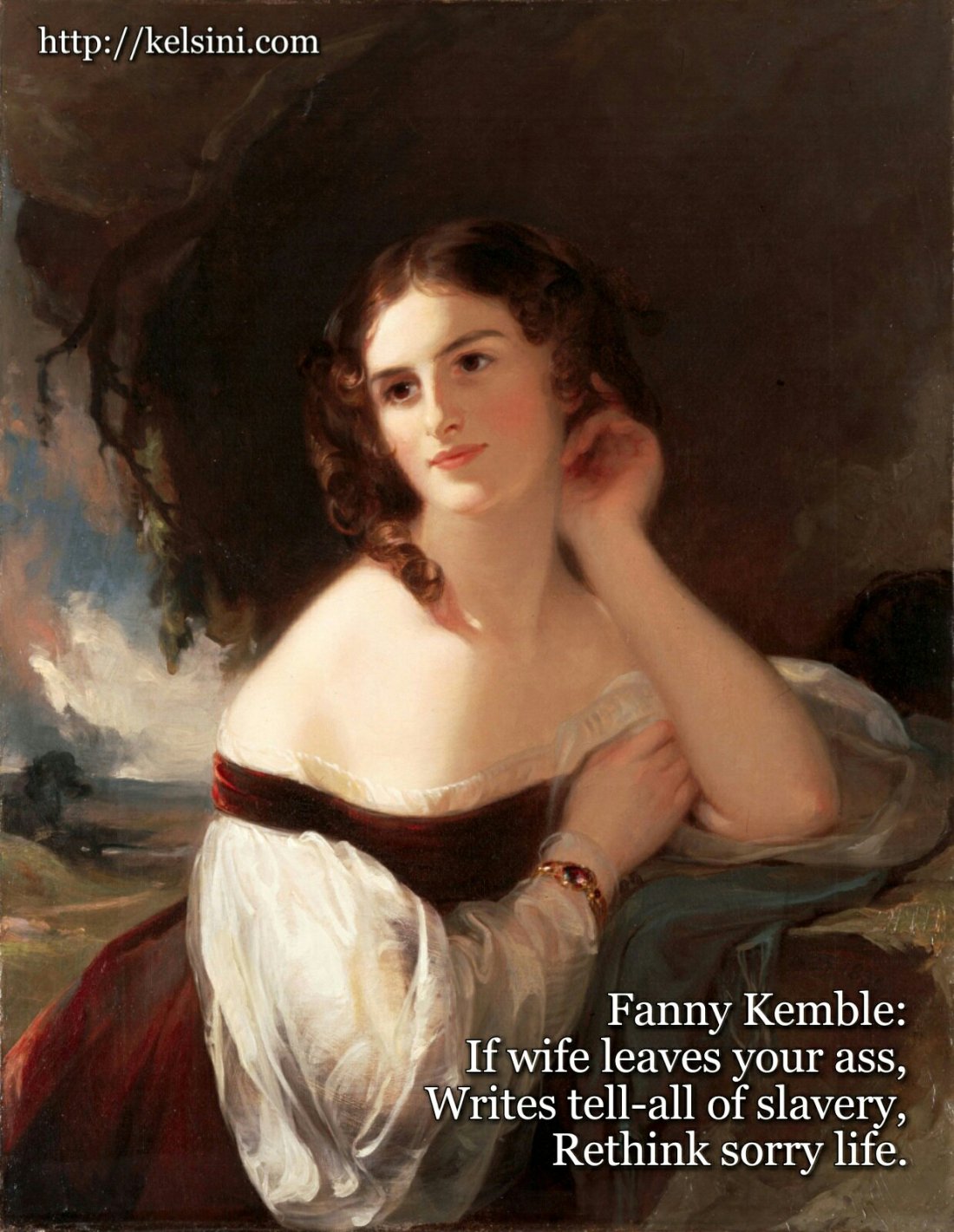 If wife leaves your ass,

Actor Week continues with a request from my mother and damnit, she gets what she wants.

Fanny Kemble was born in 1809 to a family that was a pretty big deal, having more artistic types than you can shake a stick at. As such, she had a fine education, wrote her first play at 18 and made her stage debut as Juliet at 20. After three years of playing pretty much all of the major female dramatic roles, she went on tour in the States with her pa and fell in love.

So she got hitched to Pierce Mease Butler, quit the stage, continued writing, and had a couple of daughters. Then, oh dear, Pierce inherited a gigantic plantation down in Georgia, which he kept Fanny and the girls away from. Until one fateful winter…

When Fanny finally got to see the plantation for herself, she was naturally fucking horrified. She observed the whippings and the numerous slave children who had a lot less melanin than one would expect, and she wrote that shit down. Pierce didn’t like that at all. The marriage soured because of that and his sleeping around, but she stayed because he said he’d take her girls away. But eventually, she left (he did take the girls) and returned to the stage.

When the Civil War broke out, the South enjoyed a lot of popular sentiment in Kemble’s native Britain because of schadenfreude. Kemble wasn’t having that. And oh look, she still had that journal. Time to publish. And woo, it made a stir.

Meanwhile, her ex proved to be a shit businessman, squandering his fortune and auctioning off all his slaves. The plantation was still limping along when he died in 1867.

Daughter Frances tried and failed to run the place afterwards, blaming the lazy, foolish freed slaves (who dad neglected to pay) and dastardly corrupting Northerners. Of course, she wrote about how wrong mom was and how she suffered after the war, having to eat VENISON, for pity’s sake. Another rebuttal came from the overseer’s granddaughter, who claimed Fanny came on to him and gramps spurned him and that all the sturm and drang stemmed from that. Sure.

Fanny kept writing, translating, and acting, and died in 1893.

f you liked the haiku, please consider sharing the blog, or supporting me via my revamped Patreon page or PayPal. Thanks kindly!