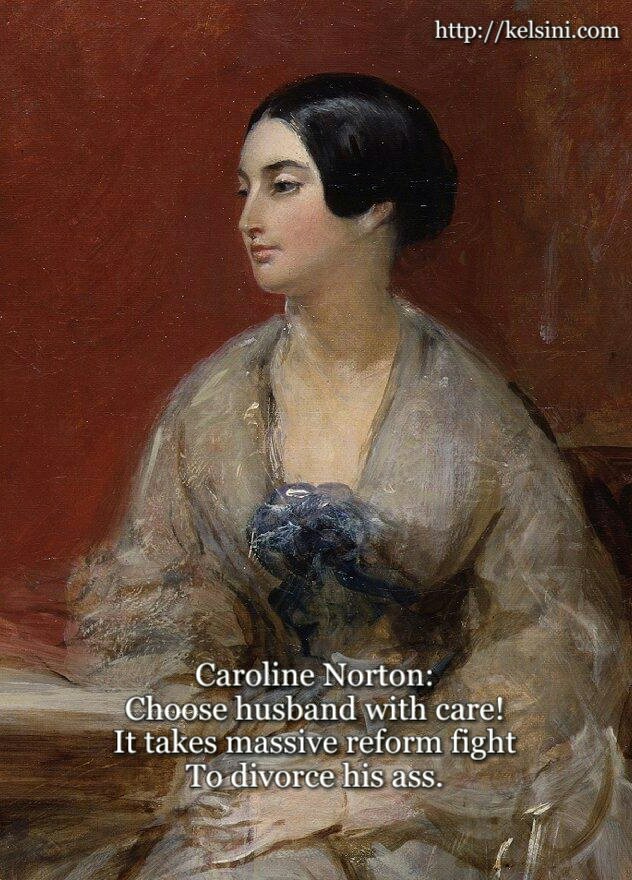 To divorce his ass.

Caroline Norton (1808-1877) was an English writer who wound up in a decades-long battle to procure the right to not be treated so shittily by her estranged husband.

Divorce in Britain was a daunting task in this era. Each case had to be reviewed by ecclesiastical courts and if you wanted to be able to remarry? It took an actual act of parliament. It was especially awful for women: if adultery was the cause, they had to prove another offense, such as desertion, bigamy, or flippin’ INCEST. Men could just claim adultery, no other cause needed. And they would get everything, including the kids. Visitation? Hollow laugh.

Enter Caroline Sheridan, an attractive and literate member of a particularly attractive and literate family. She had the bad luck to marry barrister George Norton, a jealous, violent prick who was also a shitty barrister. For the next nine years, Caroline put up with him while using the charm he lacked to advance his political career and supporting him and their three sons through her writing.

In 1836, Caroline split with the boys. George abducted and hid them, then legally stole the proceeds from the writing she was producing to support herself. She responded by charging her bills to him. He responded by suing her for adultery with the PRIME MINISTER, LORD MELBOURNE. The lawsuit was thrown out, but not before Melbourne threw Caroline under the bus.

The natural reaction to all this was to campaign for divorce and child custody reform. The latter was achieved in 1839, and she was legally entitled to custody of her youngest.. in England. The law didn’t apply in Scotland, where George took the boys. The youngest died in 1842, from blood poisoning after a minor fall from a horse.

Caroline continued the fight, though, via the pen, even managing to get the sympathies of Queen Victoria. In 1857, the law was changed to make divorce a matter for the civil courts. In 1870, the law was changed further to allow marred women rights to their own earnings and property. All the while earning her bread through writing and fending off George’s terribleness.

But she never got to divorce George. Their ‘marriage’ ended only with his death in 1875. She remarried in 1877, and died herself three months later.