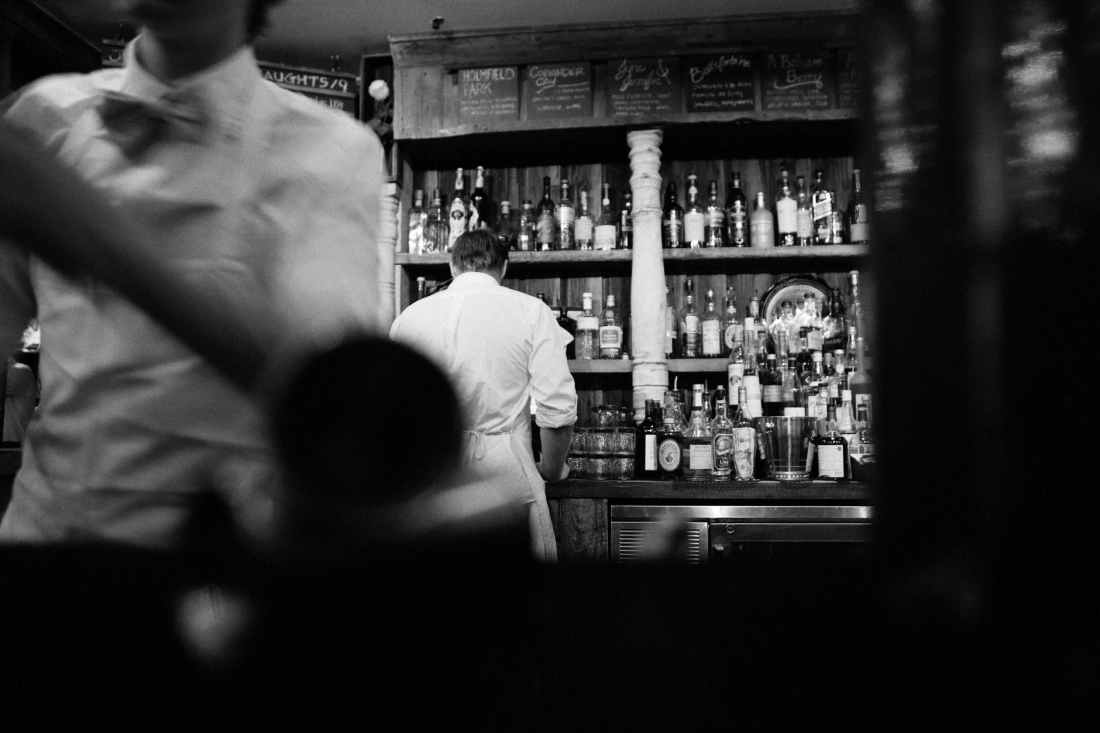 As noted in the title, this is the third part of a multi-part story, the first of which can be found here and the second here. If there’s something you’d like to know about this place, let me know in the comments so I can write about it!

It was still the first day of Primus Dale’s employment at the Queen’s Knuckles and as that day grew older, Grace Baisby and Rishard Shore’s anxieties became more pronounced. This was unusual, for Grace and Rishard were not a naturally anxious couple. Proprietorship of a relatively popular drinking establishment, especially one frequented by the Prime Minister and her cronies, was not an occupation that suited anxious people well.

Grace remembered a time in her life before anxiety entered it. That time ended about when her niece Dot first began to toddle. “New to the city, my ass,” she muttered.

The muttering was not quiet enough for Rishard not to hear, although enough not to distract the presently few patrons from their drinks and meals. “Yes, to the city from where?” he asked. His eyes watched Primus as he methodically cleaned the walls, revealing them to be several shades lighter than previously thought. “You said Kit and Dot brought him in… You don’t think…”

“Yes, I do think, but I should stop thinking and so should you.” Grace drummed her fingers on the bar. Despite her admonition, she kept thinking. Some things she thought about: how possible it would be to use the uncanny arts of thaumaturgical science to bring back her brother from the dead in order to strangle him for not teaching his younger daughter right from diabolic, whether she had made a terrible mistake for agreeing to take Primus in, and her sudden powerful need to ask Primus to mix her up a comforting Flip. (He’d been taught how to make it properly by this point, without the fire leaving the fireplace.)

“It doesn’t look like Melly’s going to come in,” said Rishard. “She should have been here half an hour ago.”

“What will we do? I’d thought we’d get him to observe for the night, but with just the two of us here?”

“It is a Wednesday, mind you, and if Stonild and her crew don’t show up, we might be able to manage…”

The fingers stopped drumming. Grace looked to her husband. “With our luck,” she said. “How likely do you think that will be?” The fingers resumed drumming. “Nevertheless, we will have to hope for that. He’ll be marvelous in time, but any more incidents such as with the Flip, and people will talk. He must observe proper human behavior first. No matter how busy it gets. Where is Melly, anyway?”

It was agreed that they would send the neighbor’s kid out to locate Melly. Then the pair proceeded to stop Primus from his wall scrubbing and carefully explain the meaning of ‘sit tight, do nothing, only look and listen.’

Outside, the sky turned a particularly marvelous shade of orange. Inside, Primus sat on his simple wooden chair.

Out of all his days – which numbered precisely seventy-three at this point in his history – this had definitely been the second-most interesting. It was true that he had made many mistakes in this ‘bar’, but the creator (‘Dot’, in public, he must remember this) said that this was to be expected and was all part of the learning process.

“Now,” said Grace (he supposed she technically qualified as his great aunt, but he supposed more strongly that it would go very hard for him were he to vocalize this supposition. But he made less mistakes when he didn’t vocalize, he found, so that was okay.)” Would you like a notepad to write in, so you don’t forget?”

“I’m sure you don’t,” said Grace in her odd tone that wasn’t like any tone the creator had used, but did sound rather like Kit. The bell at the front entrance chimed – possibly the loveliest sound Primus had ever heard, although he was excited to find out about lovelier sounds. “It begins.”

She bustled off to behind the they bar, just in time to let out a jolly, “Stonild! How was running the country today?”

Primus, as instructed, looked. Stonild proved to be a woman of middle years, like Grace, but with an enormous, protruding nose and a mop of brown, curly hair. She had the pale skin and lack of muscle tone he’d seen in Kit, which Dot had told him meant ‘indoor job, no manual labor’, and she was dressed like a less frayed version of Kit too. Other similarly dressed men and women crowded about her about her, in much the way that he’d seen puppies crowd about their mother.

Stonild sharply tugged on the lapels of her frock coat. “I do believe we finally have that dog issue sorted out, which I believe is cause for a drink. However, now we have moved on to tax appropriation for Langrish language instruction in the territories, which is also cause for a drink. A pint for me, if you please; the others can sort themselves out. Incidentally, who is that wide-eyed young man in the corner?”

Primus smiled and waved. ‘Look and listen,’ yes, he knew.

But the creator had taught him to be polite.

And what possible trouble could come from that?

Sorry it’s a little rushed today; my schedule is not kind to me right now. If you enjoyed it, please consider throwing a tip my way via PayPal or Patreon. Again, if there’s some little aspect of the world you want to know about, put it in a comment and I’ll see if I can’t write something about it. Part IV is scheduled for Monday and there will be a fifth and final part after that. Cheers!